My October 20 post mused about the place of books in scenic design today, and proposed to look at the ones that have been most significant for me. I have a special fondness for five books, the first of which is a reprint of a fairly well-known text on historic ornament styles. 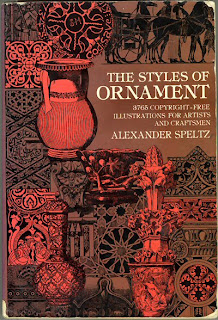 I don't remember my first contact with Alexander Speltz' 1906 The Styles of Ornament. I think it was in grad school. I had submitted a design for an assignment in which I had placed the show in a particular style era. I don't recall the show, but it probably was one in which I had moved the period, like a Shakespeare. I produced the ground plan and rendering, and presented it to my graduate project teacher and the senior designer. They asked me what I thought I was doing and I explained what I intended. They looked at each other and mumbled knowing and pitying comments to each other about my design and asked me some more questions. It soon became painfully obvious that I had not chosen my style particularly well, and that I had expressed it in a flawed and insecure way.

I had not taken any period style classes, but I had taken the required costume history courses and I thought I had a bit of a handle on it. I had begun to grasp the style but I didn't have the feel right and I was timid. I didn't get to the real conviction of statement. They mumbled more knowing things to each other and said, "I think you need to spend more time with Speltz."

Up to that point, I won't say I hated style, but I had been dismissive of it. In my naive way, I felt it was all too fussy and mostly irrelevant to real life. I thought I understood line and scale and texture, but I was impatient with arguments over style. It all just seemed too arcane to be understood easily, except by people who wanted to make a fetish of it. Certainly, I was wrong. It is that, but it is such an important tool of design and it communicates intensely.

I've never seen the original English edition of Speltz, which may have been distributed exclusively in Great Britain. The only copies widely available today are published by the reprint house Dover Publishing since 1959. My paperback copy cost all of $6.50 but now is listed at $14 on Amazon.

The book deals with the major strains geographically and by period, considering variations mostly among European cultures. There is Prehistoric and Primitive and a section on Antiquity. The section on The Middle Ages includes Early Christian, Byzantine, Romanesque, Russian, Mahometan, Gothic, Chinese and Japanese ornament. The Renaissance and Modern Times section includes Renaissance and Later Renaissance, Rococo, Colonial, and Classical Revival. Because the book was originally published in Germany in 1906 it ends with sections on Empire, Biedermeier, and German Neogrec, but there are many available resources for later periods.

The fat 650-page book has very little text and is anything but academic. It is filled with exquisite plates of line illustrations of cornices, furniture, friezes, and architectural and personal objects that illustrate the styles of each period. The cover advertises 3765 illustrations. The plates are printed quite small in this 5-1/2"x 8" paperback edition, where the original must have been much larger. But they still are quite clear and visible for study. If it is a problem for particular images, enlarge them on a copier.

It has been my practice over the years to sketch my research. My sketchbooks have many pages of fragments of cornices and objects and floral motifs from Speltz, all abandoned half-complete because I felt I had "got it" about the style I was exploring and moved on. The idea is to train my eye and my hand to the style by sketching it, with particular attention detail. My purpose is to understand the qualities of mass, line, texture, shape, and color, and to develop a feel for the proportion and scale. I sketch many objects from Speltz, in additon to architectural ideas from other sources.

The result is that when I work on the show, I'm thinking about the style world of the play and working more closely to the aesthetic of the period. It is possible to be more confident about the sense of space, the character of the line and the density of detail in the period or style that I'm working in. These things have a subliminal effect and bring conviction to the feel and finish of the design of any show, not just period designs. They allow the designer to make a more finished statement through her choices. And they help the audience to feel confident that whatever is there, is there by choice for a purpose and makes an intentional statement.

Every designer should own this book.

It may be worth mentioning that Dover also has published a similar book since 1957, Handbook of Ornament by Franz Sales Meyer, with 3002 illustrations. This also is a good reference, but I have not found it as valuable as Speltz.

Next, my favorite book on scenic design.

In design class each year I bring in an assortment of reference books periodicals and other resources from my personal library. When I pass them around the students pore over them with interest. Yet each year it seems slightly less relevant because I find even myself using them less for design reference. The world of design research has changed, and I have to recognize how that plays out with my students. But I just don't think the Web is enough.

Let's start by noting that I've been designing shows and collecting research resources for a long time. Over time what used to be pilgrimages to a few specific library resources have become browsing sessions in my own studio as I have been able to acquire them. What might one expect to find in an academic theater designer's studio? I can't remember ever having visited another working scenic designer's studio, so I may not really know. The couple costumers' studios I have seen have resembled my eclectic jumble, but with more fabrics and textures, and less accumulation of dust and bits of scenic models in the corners. And they're infintely better maintained.

On one wall of my studio I have a generous library of books and periodicals on art works, architecture, historical periods, stage production, costume, scenic designs, illustration, art techniques in various media, and all things related. And I have two long file drawers of tear sheets from Smithsonian and many other magazines over the years that illustrate periods and subjects that might turn up in a play I need to design.

So how much of this do I use for scenic design? Less and less it seems, although I do still find it essential. For one, I'm designing fewer plays in a year than I once did. And I now do a tremendous amount of visual research online, as I'm sure everybody must. My library can't really compete with the volume and diversity of image resources that are readily available, or the historical and critical commentary on even the most obscure theatrical work. 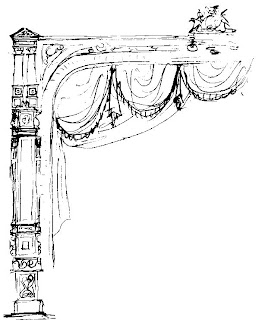 When I teach design I still argue for students to collect resources. I argue first that there's too little context for online materials, and that by focusing on the visual alone, the design itself may lack conviction. I find myself struggling to avoid a pastiche of ideas when I haven't really researched a show well enough. Or sketched long enough. And in the less-is-more world of contemporary visual metaphor, what is there must be evocative and powerful. In a larger sense, the collection also becomes an anchor for one's artistic vocabulary. One's ideas are referenced to, and indebted to this collection.

Still, I have been designing for a long time. Perhaps I've not covered every period and style, but I've certainly covered some ground. I usually can connect to ideas fairly quickly, but sometimes I can't find the way in. There are still books I turn to in order to unblock - some I have been using since my grad school days.

And there always is a block, at least one - always, in every show. If not, I don't trust my design because it hasn't been proven by doubt.

For me, the books and tear files are invaluable for building my way out of the doubt. I look at pictures and wade through the resources, flagging dozens of images. As I review the flags repeatedly I catch an image idea or two or three that begin to shape a sense or feel or fragment of the environment I'm working on. That becomes the foot in the door I need.

I start pulling together the imagery. I have to force myself to sketch as I go and scratch out words and thoughts so that fleeting images and ideas don't get lost. Here an idea, there an idea, a faint and hesitant shape begins to appear, and I go back and re-read the scene. And so on - that's another essay. The sketchbook begins to fill with bits and pieces and doodles that will lead to a design.

So if I had to recommend, say 5 books, what might they be? What have been my most referenced print resources for theatrical scene designer? Check back.
Posted by Unknown at 8:42 PM 0 comments

It also says something about the theater market in Boston. We don't pretend to have the population or tourist traffic of the Apple, but this shows the difference.

I'm guessing Candide will bring in a record-breaking total of maybe $1.7m for the run of 7 weeks or so. The Huntington probably gets the highest gross per production in town. For comparison, last WEEK's grosses in New York were $1.3m for Spiderman and Book of Mormon, $1.4m for Lion King, and $1.5m for Wicked. These are all up from the previous week, along with Follies at $1.1m and Jersey Boys at $1m.

Average ticket prices are a bit steep in New York, comparable to top seats in Boston: $100 for Spiderman, $105 for Lion King and $111 for Wicked, but $149 for Book of Mormon. At the Huntington, top seats on weekends are about $100, but there are plenty of $65 seats, and good seats for a touring musical at the Wang or Shubert for 3 weeks or so are in the $90 range. The economics of production clearly is different for commercial shows in New York.