I've been thinking about how different designers are in the theater, compared to other people involved - notably the director. No big revelation - we frequently refer to the difference in perspective. But it's another dimension of recognition for me.

First, I've been an actor and director in other lives - before I became a designer. So it's not like I don't get it, the act of directing is very social. The act of designing typically is not - at least for me.

The difference became evident at the retirement tribute for a long-term (40-year) faculty member who directed at least one production a year in the program, and sometimes another off campus. There were many, many testimonials by former students about his guidance and friendship, arising out of the very social nature of the production experience. To be fair, he also had some experience as a gaffer and a little lighting design, but his overwhelming relationships were forged in the process of directing productions. In the academic environment, those relationships also extend to other classes.

I was thinking about what was important to those students. For them the relationship was forged in the collective, informal give and take of the rehearsals, when the director must engage the actor, teasing out the best expression and forging a collective dynamic in an ensemble. With young actors, this engagement is very personal. The engagement is with the personality and psychology of the actor.

In the production experience, my mind is really elsewhere and my connections are less engaged with the actors - or even the technicians. I'm thinking about the mechanics of the stage, certainly, but really about line and mass and color and light and sound. About period and style, context and meaning, nuance and things that will make differences nobody will notice. Along with the director I also think about facilitating the movement of the play and the life of the moment - the impact and experience of the moment. 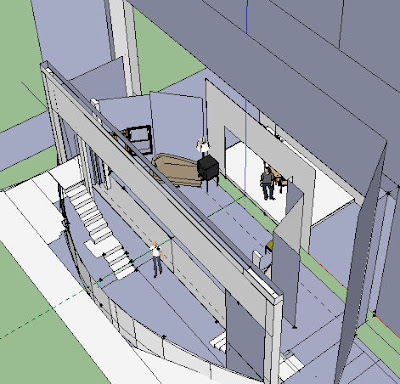 For technical directors there is the team engagement of the production crew. It is an important collective activity at the beginning level, and there is great pride in achieving Herculean feats of production. But it is intended to be out of sight, known only to those involved, and actually prized for not being evident. The engagement isn't at the same interpersonal level as the director and the actor. It's about shaping the work, doing the job well, and making it happen on time.

At least this is true in the educational environment. In professional work, directors can be more demanding of actors. Actors know how to go about the creative process of the role, and they know the shorthand of directing. Give them goals and they know how to get there. The director can focus on getting the metaphor just right - the expression and timing of it all. Designers and technical directors assign tasks to trained technicians who focus on doing the job.

But the love affair of former students with my colleague was genuine. He had done things that shaped their lives in a good way. That is something to be applauded.