With apologies to critic John Lahr, who wrote an excellent volume of discussion of the new approaches to the theater in about 1970. What theater experiences will stay with you? I will remember many, but I think these did something important to shape and affirm my understanding of what theater is and can be as an aesthetic adventure.


No. 1. In graduate school at the University of Kansas, in the early 1970s, there was a kind of intensity of work going on that I barely understood at the time. Theater in America was undergoing tremendous change from the Broadway model. A graduate student whose name I don't remember did a studio production of a play by an intense Spanish writer Fernando Arrabal, the title of which I also have forgotten. I only remember the experience of the play, whereby I first understood that theater had a real intensity that was much deeper than text. I became aware of the idea that theater did not really have to be ABOUT anything, except its own experience. I still retain mental images of that spare, dark production and an intense, mysterious, emotionally charged hour or so, that had nothing to do with the stuff of mysteries or horror movies. 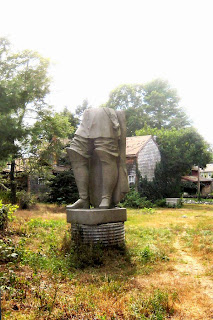 A broken statue in a yard in Halifax
provokes wonder and curiosity -
Out of context, unexpected, incomplete.

No. 2. In the 1990s, a younger couple took Diane and me to a club in Boston, across from Fenway Park on Lansdowne Street, named after the surrealist photographer Man Ray. Many details escape me over the twenty years since, but it was a new way to think about theater. We arrived shortly before ten o'clock and it was the usual loud, clubby dance-trance music with decor that suggested dark pocket-like dance rooms, shot with energetic, shadowy lighting. After about a half-hour, the music stopped, lights came on and the crowd moved toward a large open corner of the floor with a five-foot high platform against one wall. A couple uncolored, unartful spotlights illuminated this stage. Within a few minutes, skits began of bawdy parodies of fairy tales, with actors in outrageous, comedic sexualized costumes. Dialogue was shouted. There was no curtain or wings. Costumes were emblematic and satyrical. Props were handed or thrown in as needed, mistakes were applauded, people pushed each other around to the position they needed to be onstage, and everybody had an hilarious time. Maybe two or three such skits transpired, and then the crowd gathered around a giant pinata, lowered in from the ceiling. Patrons were given swings with a stick, and it finally broke, spilling condoms, sex toys, and other unidentified merchandise over the crowd. A few minutes later, the music began again, the lights dimmed, and the dancing went on. I realized that theater can thrive where it has vitality and imagination, and an audience that wants to invest in it. I would later see this kind of performance as the clear legacy of European cabaret in the 20s and 30s.

No. 3. In 2006, American Repertory Theater mounted a production of Wings of Desire, a stage version of the story that was the film (not a stage version of the film). The story is about an angel that falls in love with a mortal and descends to become mortal to be with her. It was staged in association with a theater in The Netherlands, and was shaped by director Ola Mafaalani in the European metaphoric style. The production was open and full of actions to provoke thought, association, surprise, and wonder. The play began in the dark with four dimly lit large columns of sand pouring from the grid. It was difficult to identify what they were, and it went on for many minutes, eventually filling the stage floor with piles of sand. With lights up, two male angels in modern street clothing sat on the roof of a food vendor's wagon as aromas of fried onions filled the theater. They were discussing one angel's infatuation with a mortal and his choice to join her. He descended from the cart, and the play progressed with representations of common life and its trials, which he observed. Throughout the performance, his mortal love was a dancer entangling and dancing in a long swag of bright fabric suspended from the flies, an inversion of the earthbound-mortal - celestial-angel dichotomy. As I recall she never touched the stage until the end when they met in an embrace. The stage was open to the walls without draperies.

No. 4. In 2013, an impressario of those Lansdowne club events above had studied theater and developed his chops as a writer, and created one of the more interesting nights in the formal theater in my experience. Ryan Landry participated in the Huntington Theatre's playwright development programs in association with Boston University. They gave him a season slot at the Wimberly, their South End second theater, where the Huntington stages their new works. Landry took the basic story line and characters of the 1931 Fritz Lang movie thriller "M" and rewrote it. In his production Brecht and Pirandello met Man Ray (artist and Boston rave club) big time. all structured around a rich vocabulary of pop and old movie references, loaded with iconic surprises, cheesy cartoon imagery, giant props and wonderful metaphors. Shouted dialogue, broad gesture and obvious takes and gags, all at a break-neck pace almost leaving one breathless by the end. The plot moved from the "M" deviant into a serious "Six Characters" hook that made it all make sense. In the end the eraser of a giant pencil from the flies took out everybody, including the author, except the last two characters who exited out the back door of the stage to end the play.

These have not been all of my theater highlights - I have many others in the 300 or so productions I've seen over the years. Certainly these have enriched my life immeasurably.